Cotswold Archaeology are pleased to have been working with the Boxford History Project on further excavations at the Mud Hole Roman Villa site. Following the discovery in 2017 of the a very rare mosaic featuring scenes from Greek Mythology, the community group raised enough funds to allow another season of excavation, which has just come to an end.

On Saturday 31 August we supported an open day at the site and were astounded by the numbers of visitors and the very real enthusiasm and interest in the site. Around 3,000 people turned out on the day to see the site, listen to the site team explain what had been found and have a look at some of the artefacts recovered. 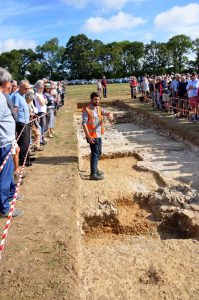 While the focus of the excavations this year has been on revealing and recording the full mosaic floor, there were a number of other research questions that we were keen to resolve. The investigations have explored the origins of the structure, sought to determine whether further mosaics might have been present and tried to understand the later history of the building and its use.

The results have been astounding. Further elements of the imagery on the mosaic have been revealed, showing a greater array of tales from Greek Mythology. We also now have a much better understanding of the building’s construction, evidence to suggest that no other mosaic floors were present and evidence of alterations and repair late in the building’s life. There is a wide range of material that now needs further detailed investigation and analysis before we can tell the full story. We look forward to sharing this with you when the work is complete!