CA has contributed to a major new study of ancient DNA that has traced the movement of people into southern Britain during the Bronze Age (2200–700 BC).

In the largest such analysis published to date, scientists examined the DNA of nearly 800 ancient individuals including burials discovered by CA.

The new study, led by the University of York, Harvard Medical School, and the University of Vienna, shows that people moving into southern Britain around 1300‒800 BC were responsible for around half the genetic ancestry of subsequent populations.

The combined DNA and archaeological evidence suggests that, rather than a violent invasion or a single migratory event, the genetic structure of the population changed through sustained contacts between mainland Britain and Europe over several centuries, such as the movement of traders, intermarriage, and small scale movements of family groups.

The study finds evidence that the new migrants became thoroughly mixed in to the Southern British population in the period 1000‒875 BC.

The researchers say the origin of these migrants cannot yet be established with certainty, but they are most likely to have come from communities in and around present-day France. 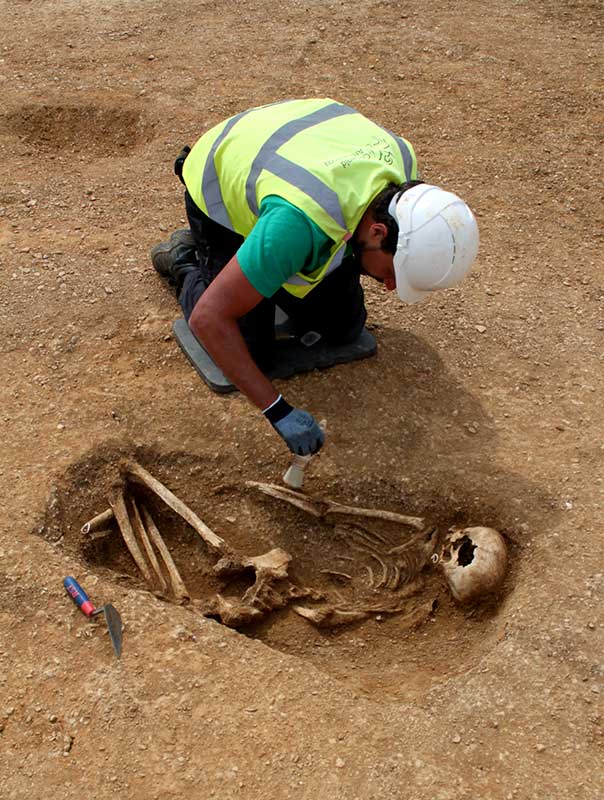 The Middle to Late Bronze Age (1500‒700 BC) was a time when settled farming communities expanded across the landscapes of southern Britain, and extensive trade routes developed to allow the movement of metal ores for the production of bronze.

These new networks linked wide-ranging regions across Europe, as seen from the spread of bronze objects and raw materials.

The study’s lead archaeologist Professor Ian Armit, from the University of York, said: ‘We have long suspected, based on patterns of trade and shared ideologies, that the Middle to Late Bronze Age was a time of intense contacts between communities in Britain and Europe.

“While we may once have thought that long-distance mobility was restricted to a few individuals, such as traders or small bands of warriors, this new DNA evidence shows that considerable numbers of people were moving, across the whole spectrum of society.”

Some of the earliest genetic outliers have been found in Kent, suggesting that the south-east may have been a focus for movement into Britain. This resonates with previously published isotope evidence from archaeological sites like Cliffs End Farm, where some individuals were shown to have spent their childhoods on the Continent.

The new DNA evidence may also shed light on the long-standing question of when early Celtic languages arrived in Britain.

Since population movement often drives linguistic change, the new DNA evidence significantly strengthens the case for the appearance of Celtic languages in Britain in the Bronze Age. Conversely, the study shows little evidence for large-scale movements of people into Britain during the subsequent Iron Age, which has previously been thought of as the period during which Celtic languages may have spread.

Professor David Reich, from Harvard Medical School, said: “These findings do not settle the question of the origin of Celtic languages into Britain. However, any reasonable scholar needs to adjust their best guesses about what occurred based on these findings.

“Our results militate against an Iron Age spread of Celtic languages into Britain – the popular “Celtic from the East” hypothesis – and increase the likelihood of a Late Bronze Age arrival from France, a rarely discussed scenario called “Celtic from the Centre.”

A further unexpected finding of the study is a large increase in the frequency of the allele for lactase persistence (a genetic adaptation that allowed people to digest dairy products) in Bronze Age populations in Britain relative to the Continent.

Co-senior author of the study Professor Ron Pinhasi, a physical anthropologist and ancient DNA specialist from the University of Vienna, said “This study increases the amount of ancient DNA data we have from the Late Bronze and Iron Age in Britain by twelvefold, and Western and Central Europe by 3.5-fold.

“With this massive amount of data, we have for the first time the ability to carry out studies of adaptation with enough resolution in both time and space to allow us to discern that natural selection occurred in different ways in different parts of Europe.

“Our results show that dairy products must have been used in qualitatively different ways from an economic or cultural perspective in Britain than they were on the European continent in the Iron Age, as this was a time when lactase persistence was rising rapidly in frequency in Britain but not on the Continent.”

Although the new DNA evidence sheds most light on Britain, the data also indicate population movements between different parts of continental Europe, confirming what archaeologists have long suspected – that the Late Bronze Age was a period of intense and sustained contacts between many diverse communities.

The study ‘Large-scale migration into Britain during the Middle to Late Bronze Age’ is published in Nature.