Archaeologists from Cotswold Archaeology and Oxford Archaeology are now working with developer, Redcliff MCC LLP, on Phase 2 of the Redcliff Quarter Development. We are focusing on five key areas. With excavations in Areas A to C completed, we have revealed: 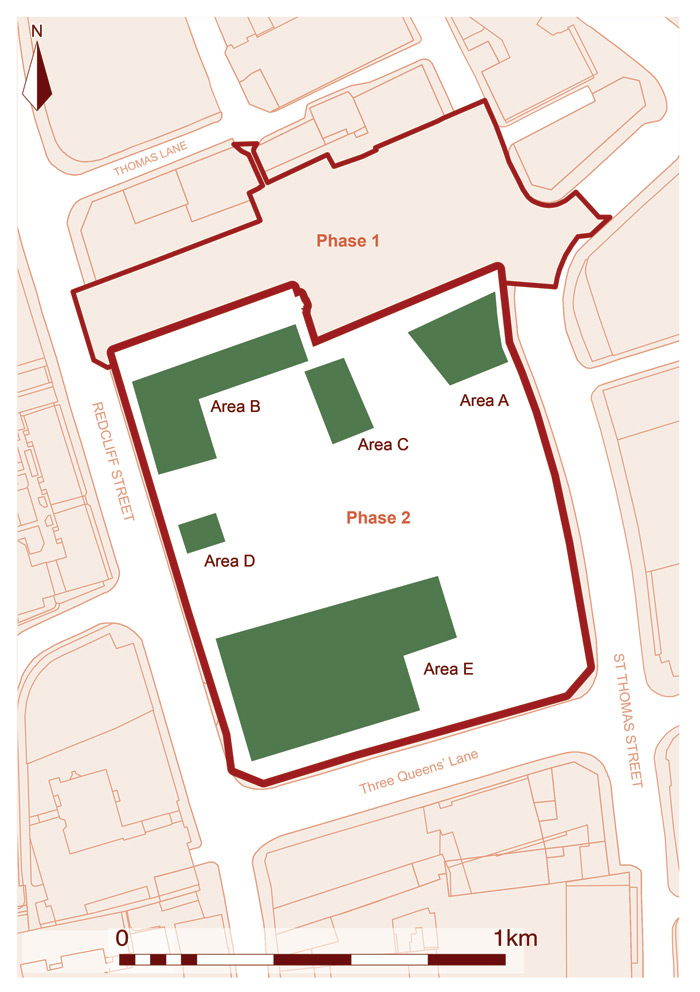 Area A: here we found the remains of medieval and post-medieval buildings and walls, as well as gardens and a gravel path. Industrial structures, possibly bases for dye-vat or tanning pits, were also discovered in the backyards of the buildings.

Area B: the north part of this area was not initially built on during the establishment of the suburb of Redcliffe in the early 12th century. Instead, large cess pits were excavated, which contained human waste and other materials, including leather shoes and wooden objects. A late medieval, high-status stone building was later built on elaborate arched supports across the cess pit area. The building later had a decorative tiled floor.

Area C: the main discovery in this area is the 12th century Law Ditch. We have discovered that the majority of earlier ditches marking out plot boundaries on St Thomas and Redcliff Street also acted as drains, feeding into the Law Ditch. Originally just a ditch, it was later replaced by a stone-built culvert, which in its final phase had a ceramic pipe inserted. 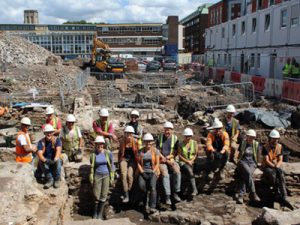 We are now focusing on Areas D and E, where we expect to find further high-status medieval buildings. We also expect to discover the remains of industrial structures and a 19th-century iron foundry.

We will continue working on site into Autumn 2018, and the excavations can be viewed from Redcliff Street. Once we have finished, our specialists will analyse and record the information collected. Combining these results with historic sources, maps and other excavation results, we will then be able to build up a picture of the site from the 12th century. Once the work is completed, we are keen to share these results with you.