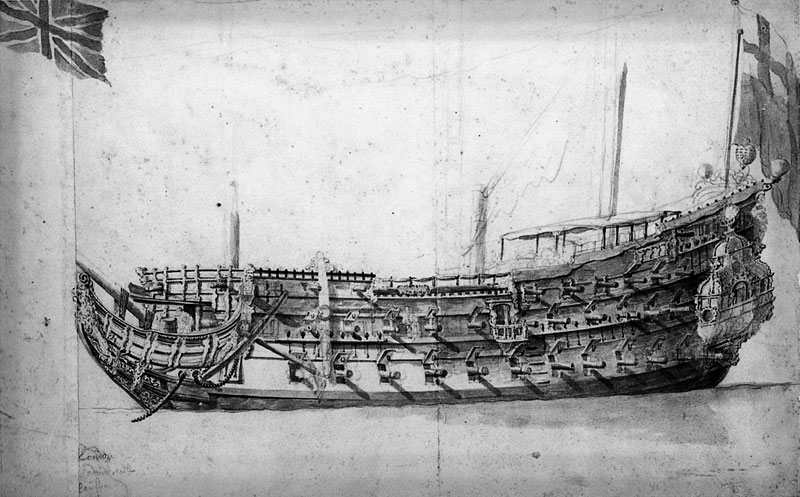 One of the most exciting projects of last year was the dive to survey and evaluate the remains of the wreck of The London, just off the coast of Southend.

The London was a ‘second rate’ ship of the line that was built at Chatham in 1656 for the Commonwealth Government under the Lord Protector Oliver Cromwell. In May 1660 she was part of the fleet that transported King Charles II to England during the restoration of the Monarchy. In 1665, at the beginning of the second Anglo-Dutch War, the London was appointed as flagship of the Red Squadron and was en route to the Hope when she was torn apart by a massive explosion.

The event was seen by Samuel Pepys and recorded in his diary entry for March 8th 1665:

“This morning is brought me to the office the sad news of “The London,” in which Sir J(ohn) Lawson’s men were all bringing her from Chatham to the Hope, and thence he was to go to sea in her; but a little a’this side the buoy of the Nower, she suddenly blew up. About 24 [men] and a woman that were in the round-house and coach saved; the rest, being above 300, drowned: the ship breaking all in pieces, with 80 pieces of brass ordnance. She lies sunk, with her round-house above water. Sir J(ohn) Lawson hath a great loss in this of so many good chosen men, and many relations among them. I went to the ‘Change, where the news taken very much to heart.”

During the summer of 2014, as well as archaeological evaluation of the site, a large number of loose finds were collected by the dive team, led by Site Licensee Steve Ellis. Volunteers organised by Southend Museum oversaw initial processing and care of the finds as they arrived on shore. A large number of leather shoes have been recovered in remarkable condition and the finds are now being conserved at English Heritage’s laboratory at Fort Cumberland.

This summer an excavation of the surveyed area will be carried out and no doubt more exciting finds recovered.