Recently the MK team have been excavating the remains of an interesting sequence of settlements dating to the Iron Age and Roman periods just to the south of the village of Brixworth in Northamptonshire.

Iron Age settlement seems to have developed to the east of the line of a major north-south trackway, interestingly on a similar alignment to the modern road into the village. Part of our excavation focused on an area of Middle Iron Age settlement (400BC – 100BC) immediately to the east of this trackway. The settlement included the remains of a drainage ditch showing the position of a circular timber ‘roundhouse’ and several large circular pits lined with stone, which were probably used to store surplus grain, perhaps for use in feasting. Close by to the east of these structures was a square enclosure defined by a ditch, which dated to a slightly later period (the Late Iron Age 100BC-AD43).

It is this site that provided the setting for the discovery of our ‘rusty things’. Intriguingly placed on the base of one of the storage pits we found an iron dagger or short sword (below left), a whetstone (used for sharpening blades) (below, middle) and a metalworker’s poker (below right). These objects were found in a group, close together at the side of the pit and had been covered over by the first soil to be thrown into the pit, presumably after it was no longer needed for storing grain. The dagger/short sword dates to the 3rd or 4th centuries BC and therefore presumably so do the other objects. 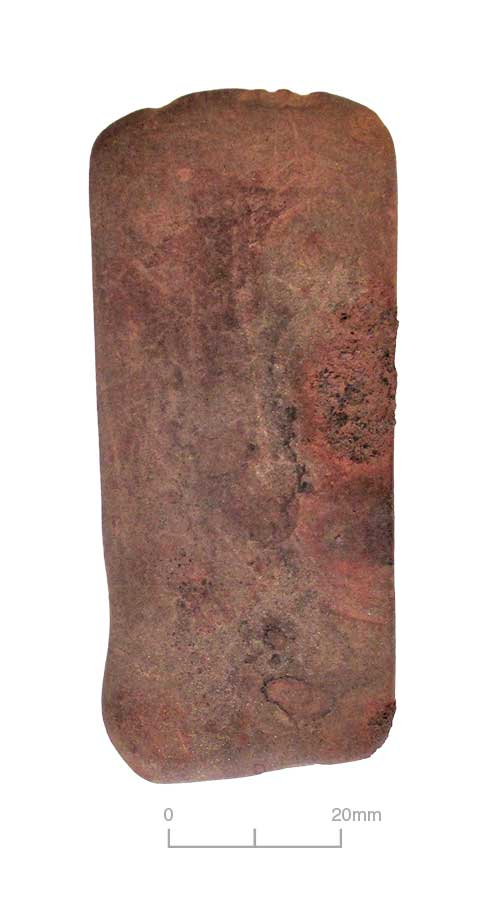 The later square enclosure ditch described above also contained a metal object, this time of a type known as a “currency bar” ( see below) which were flat bars of iron sometimes shaped into the form of a sword blade and presumed to be used for the exchange of metal.

In a curious echo of last week’s post on Roman Towcester both of these groups of objects had been deposited in such a way as to render the structures into which they were put unsuitable for their original purpose. Both the grain storage pit and ditch would have had to have been at least partially filled with earth for the objects to have been preserved in the places in which they were found. This suggests that these too may have been “closing deposits” placed in the ground at the end of the life of the settlement (or at least some of its structures) to mark disuse or abandonment.
<< BACK