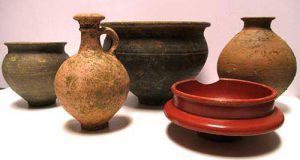 Not entirely unexpectedly, coming from one of the largest excavations ever undertaken within Lactodurum, Towcester’s Roman Town, but during the course of our work we recovered over 5500 sherds of pottery. Again not unexpectedly the vast majority of the pottery dated from AD 70 to AD 270. Nearly every type of ceramic from the period was unearthed during several months of excavations; including flagons and jugs, dishes and bowls, beakers and jars.

The three vessels on the back row (also pictured below) were all recovered from with the cellar of the ruins of a stone built Roman house. The house was set back 40m from the main road through the town (Watling Street) and was probably occupied during the late 2nd and 3rd centuries. The smaller (wide-mouthed and necked) jar (below on the left) was found stacked inside the larger one (below, middle), alongside the decorated (rouletted) narrow-mouthed jar (below right). All three plus other less complete vessels were found rather curiously with several cattle skulls, all lying within demolition rubble within the cellar. Although the vessels were utilitarian and simple in nature, in fact the kind of pots one would find in a typical household at the time, the curious arrangement of the pots and animal bones strongly suggests that this was some form of ritual deposit to mark the ‘closing’ of the old house.

The locally made ring-necked flagon (below left) and the samian bowl (below right), probably made in what is now France, were discovered in a box or casket burial. The wooden sides had long rotted away leaving only the outline of the box, its metal hinges and its contents (the pottery and cremated human remains). Unfortunately none of the pots could be closely dated, although some time between AD 160 and AD 250 is most likely. Casket or box burials such as this, although more common occurrences in the south-eastern counties are a rare find from this part of England; this being the first discovered in Towcester.