This is the fourth instalment celebrating the work of Cotswold Archaeology’s Milton Keynes team. In this piece we take a look at some “stony things” from two recent excavations. The first of our discoveries is from an Iron Age settlement at Brixworth, Northamptonshire, which has already produced rich pickings in the form of an iron short sword/dagger and a metalworking tool. The second is a Roman period settlement site investigated during 2015 and 2016 on the eastern outskirts of Rugby, Warwickshire. Readers of our rusty things story will recall that at the Iron Age settlement at Brixworth we discovered pits cut into the bedrock; pits probably used for the storage of grain. At Rugby our excavations of the Roman settlement revealed the remains of a large clay built oven. Although these sites provide the setting for the discovery of our “stony things” it is clear that these stories are very much bound together as “foody things”, in this case the grinding of grain. 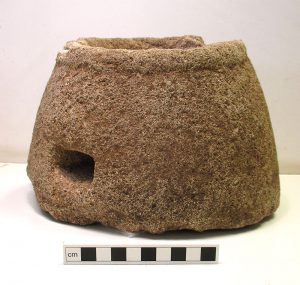 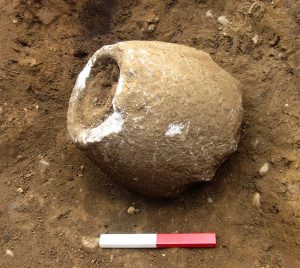 At Brixworth the Iron Age settlement produced a magnificent example of an object known as a beehive quern, an object made from two stones (only the uppermost one is pictured above). This technique requires the upper stone to be turned by hand, grinding the grain between them– a truly laborious task.

At Rugby the Roman period inhabitants employed a different technique to grind the grain; they had the use of a millstone (pictured below). This system still utilises the same action of grinding the grain between two stones but this would have been powered by animals or by water (in a watermill) or even by slave workers. This method is far more efficient, allowing far more flour to be produced much quicker. Of course it would also have been far less backbreaking too (unless you happen to be the slave worker!). 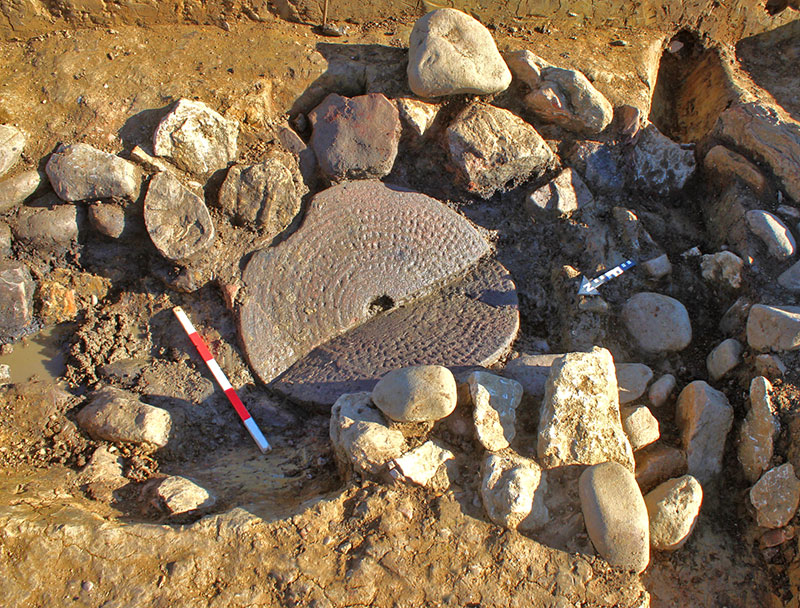 The technological shift from the use of quernstones to millstones in the production of flour may at first glance represent a clear improvement, a real labour saving device. But this change was accompanied by a move away from simple household food production to a more centralised, community-wide system of food production bringing with it all the strains and stresses of complex administration.