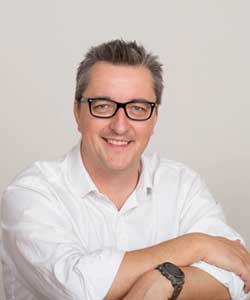 Rhod studied for a first degree at the University of Leicester and followed that with an MSc and PhD from the Institute of Archaeology, University College, London. He studied zooarchaeology and osteology at post-graduate level and retains an interest in both, as well as in urban archaeology (particularly of Ipswich).

After a period of working for various organisations in South East England he joined Suffolk County Council as a Project Officer in 2002, and was promoted to Senior Project Officer in 2007 and then Head of the Contracting Team in 2012. Following Suffolk County Council’s outsourcing of the Contracting Team in 2015 Rhod became the first Managing Director of Suffolk Archaeology Community Interest Company. In 2019 Suffolk Archaeology merged with Cotswold Archaeology and Rhod became head of the Suffolk office.

Rhod is a Member of the Chartered Institute for Archaeologists (MCIfA) and has 20 years’ experience of a wide variety of archaeological projects of many periods. He manages a diverse portfolio of projects from tender through to analysis and leads on large scale tenders and contract negotiations.