Talk by Jeremy Clutterbuck on the Execution Cemetery Excavated at the Aldi Site, Weyhill, Andover

On 9th September 2019, CA’s Jeremey Clutterbuck gave a talk to WARG, the society for Winchester archaeology and local history, about the Execution Cemetery discovered at the Aldi Site at Weyhill, Andover. WARG member Iris Gould has provided us with this wonderful overview of Jeremy’s presentation.

Jeremy Clutterbuck is an Osteoarchaeologist and a Project Officer for Cotswold Archaeology.  He was also, for 14 Years, lead singer with a group called Rock of Ages. Yes, really. Jeremy said that presenting helps him toward a deeper insight into his field of study so he welcomed the opportunity to deliver this talk to WARG.

Cotswold Archaeology’s excavation of the site was funded by the supermarket Aldi, in accordance with the requirement for commercial archaeology to be funded by the developer. It had not previously been known that the cemetery existed. Jeremy said that, as an osteoarchaeologist, he was very excited at the discovery of a graveyard containing over 124 bodies but he was determined to stay calm. Time was short as the developer was eager to proceed with the building of the store. 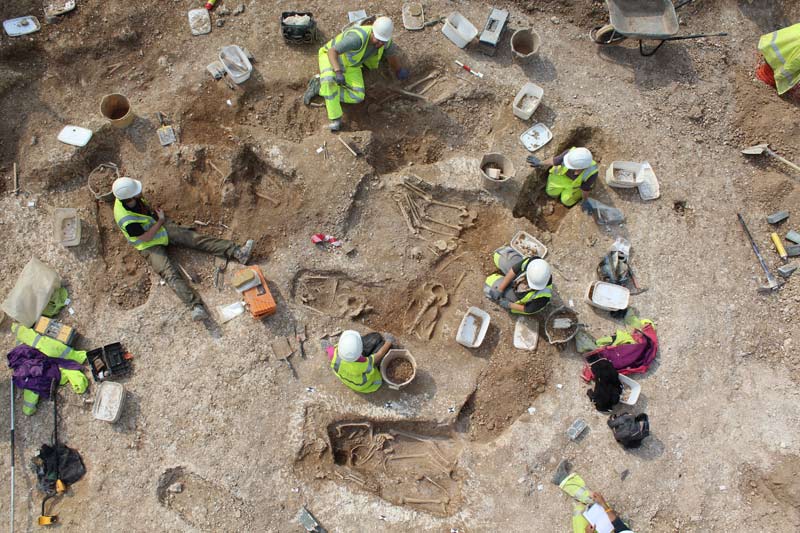 According to Andrew Reynolds, an authority on execution sites, the location of the graveyard exhibits the key characteristics of an execution cemetery:

In modern times only ploughed fields could be seen but latterly a garage was built on the site. Amazingly, said Jeremy, “the best stuff survived”.

The skeletal remains in the graveyard were carefully analysed and the group was found to be “very unusual indeed”. Where sex could be determined, all the individuals were adult males and were under 35 when they died. This is not what would be expected of a ‘typical’ cemetery but is consistent with the profile of an execution cemetery. Further evidence for the nature of the site came from the injuries sustained by many of the individuals, which strongly suggested that they had been executed. Several had cut marks on their necks or had been decapitated, with the skull placed separately within the grave. One man had his hands cut off at the wrist and placed underneath his body, whilst others had their hands tied together along with fractures suggesting death by hanging. Some graves were too small for the skeletons placed within them, and they were crammed into the space. One skeleton was found with a sheep placed above it.

A programme of radiocarbon dating suggests that the cemetery was in use for an unusually long period of time. Most of the individuals were buried between the 9th and 12th centuries AD and one burial appears to have been as late as the 13th or 14th centuries. Andover is the only known execution graveyard site where such longevity exists and it has the largest number of executions so far known. This argues for a degree of stability, which enabled such continuity to exist. Even during times of upheaval, the judicial process continued, overseen by shire-reeves, or sheriffs. Jeremy revealed that the reigning monarchs ranged from Egbert (802–839) to Edward III (1327–1377).  Isotopic analysis shows that the bodies were all of local people, except one who may have been of Nordic origin. Early Anglo-Saxon deviant burial sites formed part of larger graveyards but by the time of the Weyhill burials they were kept separate.

Evidence of gallows has been found and there are local references to a “Hangman’s Field”.
Very few artefacts were recovered from the cemetery. A few buckles were found and a silver coin of Ethelred II (Ethelred the Unready) was clutched in the hand of one skeleton, which had been buried lying face down, apparently tossed into the grave.

The discovery of this site marks the beginning of a search for documentary evidence to shed light on the judicial system that gave rise to this disturbing cemetery. There is a similar site at Stockbridge Down and it is hoped that further excavations can take place there. A monograph is to be published in February 2020 and a programme about the Weyhill site is to be aired on Channel 4.

Whilst the subject matter was extremely grim, Jeremy’s clear and well-informed delivery made this an extremely interesting talk.