In 2019 Cotswold Archaeology worked with the Parks Trust to carry out an archaeological investigation and community project at Great Linford Manor Park, Milton Keynes, funded by the National Lottery Heritage Fund.  The Park surrounds Great Linford Manor, a late 17th century house with 18th century formal gardens that replaced an earlier, medieval, manor house. Over two separate weeks in April and July our archaeologists, Parks Trust staff and local volunteers worked to reveal elements of the history of the park and the results have been used to inform a second, larger, Lottery bid called the Reveal, Revive and Restore Project that aims to improve the park as a visitor destination, including revealing, restoring and recreating aspects of the 18th century formal grounds.

The project team investigated the park Ha-ha, a type of sunken fence that was commonly used in landscaped gardens and parks in the eighteenth century to give the viewer the illusion of an unbroken, continuous landscape while providing a boundary that prevented grazing livestock in the park from getting into the formal gardens and eating all the flowers and plants! Constructing a Ha-ha involved digging a deep, dry ditch, the inner side of which would be faced up to the level of the surrounding ground with either a dry-stone or brick wall and the volunteers and archaeologists worked together to reveal a well-preserved dry stone retaining wall, surviving to a height of just over 1 metre. They were also able to establish the shape and appearance of the accompanying ditch. Immediately in front of the manor house, team members also investigated the likely foundation pit of an ornamental sundial, the approximate location of which had been identified from historic photographs dating to the 1960s. The project also led to the unexpected discovery of medieval remains, of 12th to 14th century date, including at least one probable building. 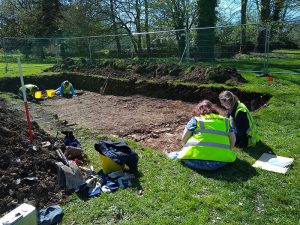 There was a particular emphasis on public engagement and community involvement throughout the project with over 80 volunteers participating in the April dig, alongside Cotswold Archaeology staff. A public Open Day with guided site tours also allowed greater engagement with a variety of visitors to the park. Direct on-site engagement was supplemented by social media campaigns throughout both stages of fieldwork, showcasing progress and raising awareness for the project. A short segment filmed for the local ITV evening news, broadcast at the start of the project, also successfully raised awareness among the local residents. In addition, the Parks Trust produced a time-lapse video documenting the progress of the excavation around the Doric Seat, a 18th century garden feature, that also revealed the walls of an earlier, probably medieval building underneath the Doric Seat – this is still available on YouTube.

As part of the 2020 Festival of Archaeology, it was hoped to hold a series of guided tours around the park, focusing on the results of the 2019 investigation. However, due to the current situation it hasn’t been possible to do this. Instead we have worked with the Parks Trust on a short film (below) that revisits the 2019 investigations. We hope you enjoy it.