Bourton-on-the-Water is a place well-known for its long history of settlement stretching back to before the Romans, a longevity perhaps partly due to its location near the confluence of the rivers Windrush and Dikler in the wider Thames catchment of the Cotswolds. There is evidence for an earlier Neolithic causewayed enclosure under the better known fortified enclosure of Salmonsbury Camp, which has Iron Age and Roman remains; and to the west of the modern town a Roman roadside settlement straddled the major road, Fosse Way, where it crossed the Windrush.

Since the 1990s, excavations by Cotswold Archaeology and others have brought to light Late Neolithic/Early Bronze Age and Anglo-Saxon features as well as more Iron Age and Roman ones. A report on our excavations at The Cotswold School in 2011, authored by Jon Hart, Jonny Geber and Neil Holbrook, has been recently published in the Transactions of the Bristol and Gloucestershire Archaeological Society (volume 134). Here, part of an early to middle Iron Age settlement and a later Roman cemetery were excavated. 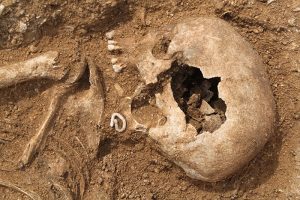 The story of human occupation at Bourton has now been added to by discoveries from further CA investigations in 2015 at Roman Way on the northern side of the town.  Here, Mark Brett and his team found a small group of burials comprising two inhumations and ten cremations. These were without pots or accompanying grave goods, although one of the inhumations, of an older woman, was buried apparently wearing a rare type of lead hair ornament (see above), and had a completely corroded copper object (shown only by green staining on the skull) by her right ear.  A series of seven radiocarbon dates on bone, modelled using Bayesian statistics by Frances Healy and Elaine Dunbar showed that both the inhumations and cremations dated to between c. 1485–1245 and 1285–1065 cal. BC (at 95% probability), in the middle Bronze Age. The inhumations and cremations were shown to have been contemporary with each other, which is unusual but not unique, as inhumation had been largely replaced by cremation by this time. 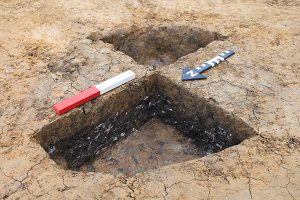 The cremations are quite typical of the middle Bronze Age. The bone, together with charcoal from the pyre, filled the width of the grave pit indicating an absence of a container of any sort for the bone (see left). It is probable that the pyres were located not far away, but there was no evidence for them. It is interesting that the wood used in most of the pyres was alder, and insect tunnels in some of the charcoal showed that the wood, which is normally not favoured as fuel, had been seasoned to make it sufficiently combustible. Of the other cremations, one used oak and another ash. The fuelwood used for Bronze Age cremations tends to be of a single taxon, with oak usually preferred. Differences in fuel wood have been found elsewhere and it has been suggested that the choice of different species may have been motivated by concerns other than immediate availability, such as the need to follow specific ritual practices. The lack of information on gender or other variables from the cremated bone makes this suggestion impossible to explore at Roman Way. 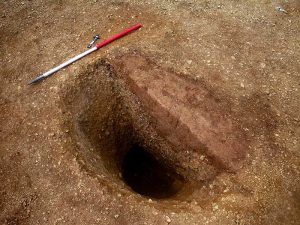 Another discovery, lying 50m to the north-east, and rarer and more unexpected than the middle Bronze Age burial ground, was a curving alignment of three large postholes. The holes were about a metre across and half a metre or more deep, with clear post-pipes indicating posts of up to half a metre in diameter (see right).  They were without artefacts and initially suspected to be associated with the burial ground, perhaps serving as marker posts. However, a radiocarbon sample from a deposit of charred hazelnut shells at the base of one of the pits returned a date of 8470–8295 cal. BC, placing it in the early Mesolithic. Two further dates were subsequently obtained: one on hazelnut shell from the first posthole (8530–8295 cal. BC) was virtually identical to the first date, and the other on hazel charcoal from a different posthole was slightly later, at 8221–7961 cal. BC (all at 95% probability). These dates give a very strong indication that the giant postholes were indeed early Mesolithic and as such represent one of the earliest human-made structures yet found in Britain. The group is comparable to three postholes found beneath Stonehenge car park, radiocarbon dated to the 9th to 7th millennia BC, although the Stonehenge features were slightly larger; they are thought to have held posts of pine rising some 3-4m above the contemporary ground surface. Interpretation at both sites is, of course, a matter of conjecture, although something akin to totem poles may be envisaged.

The Excavation Report for the site at Roman Way is available for download, with a summary publication in the Transactions of the Bristol and Gloucestershire Archaeological Society (volume 135).

By coincidence, Professor Tim Darvill, Chairman of the Board Trustees of Cotswold Archaeology, has been undertaking his own research on Mesolithic ‘monuments’ of this sort. They are rare but may be more common than has been supposed because, in the absence of any early Mesolithic artefacts, radiocarbon dating (where this is indeed possible) may be the only way of recognising them for what they are.