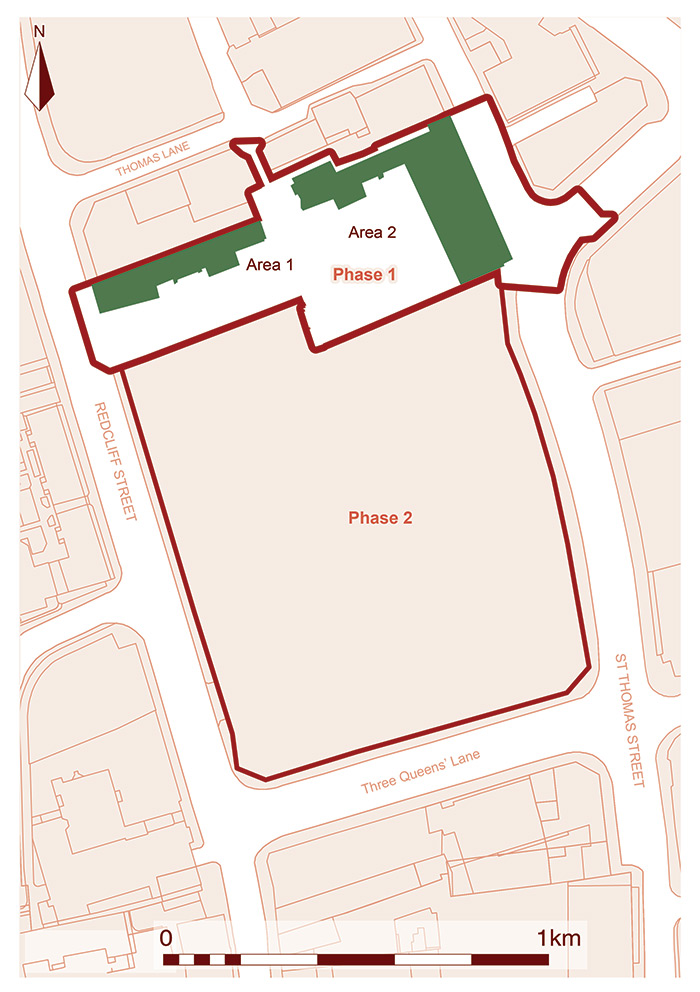 Cotswold Archaeology has been working with developer Redcliff MCC LLP and Change Real Estate on the first phase of the Redcliff Quarter development. Works began in late January 2016 on an area fronting Redcliff Street. Our archaeologists revealed the extent of two medieval plots extending from the street frontage back into what would have been rear gardens bounded by a large communal ditch, the ‘Law Ditch’.  The Law Ditch defined the legal boundary between properties along Redcliff Street to the west and St Thomas Street to the east, and was probably established in the 12th-century.

The earliest medieval buildings would have been located partially beyond the site, under Redcliff Street to the west. However, some of the rear part of the original medieval buildings, which are as early as 12th-century in date, survived within our excavation area. As the site was redeveloped many times over the following centuries, the later walls still generally followed the original property boundaries laid out in the 12th-century.  These later developments meant that only fragments of original walls and floor surfaces of the early buildings survived, along with remains of possible hearths and extensive charcoal layers.  The original stone or timber buildings were missing, removed by later activity.

To the rear of the properties fronting the street were garden plots extending eastwards towards the ‘Law Ditch’, located below the cobbled surface of the 19th-century Queen’s Head yard.  Running down the centre of the excavation area was a sequence of boundaries that had been re-established over time. The most recent of these was marked by a ceramic pipe which had been dug through an earlier (possibly very late medieval) stone drain.

There was one single feature that crossed this east/west boundary, a single small north/south wall extended across the central division. This wall potentially marked a limit of higher concentration of activity to the rear of the former buildings and a sparser area to the east, nearer the Law Ditch. The area to the immediate rear of the properties is likely to have seen the highest activity, with waste pits and the likely presence of domesticated animals causing the ground to become heavily turned.

When these mixed garden soils, dated to the 15th-century, were removed earlier pits, a well and ditches were revealed. These date to the 12-13th-century and are likely to represent activity relating the earliest phase of occupation of the site.

A large, steep-sided ditch ran east/west along the alignment of the later drains and formed a property boundary between Nos 25 and 26 Redcliff Street, but also acted as a drain taking excess water into the Law Ditch. This ditch had been lined with wattle on either side to prevent the steep sides from collapsing. The ditch had been re-excavated and maintained over a long period of time.

A second ditch, located just to the north of the wattle-lined ditch, appears to be even earlier. This ditch had nearly vertical sides, steep enough to have held timbers, though there was no evidence for this. Within the ditch were extensive waterlogged remains, including worked wood and leather objects including shoes.

To the western edge of the gardens, nearer the original properties were a number of intercutting pits likely to have been domestic waste pits. These contain large quantities of pottery, bone, metal objects, including knives, an early medieval token, and organically rich material. Excavation of the Redcliff Street area (Area 1) concluded in early April.

To the east, a second excavation area (Area 2) is currently being opened up along the St Thomas Street frontage. So far this has revealed medieval building footings which, surprisingly, appear to be remains of buildings that originally had their frontages on Thomas Lane, now a small connecting lane between Redcliff Street and St Thomas Street, rather than fronting St Thomas Street as is the case now. This is reinforced by the presence of a garderobe chute through the easternmost side wall which leads out into an external, stone-built, cess-pit.