In 2016 Cotswold Archaeology excavated a site prior to the construction of a new Aldi store, at Weyhill Road, on the western fringes of Andover, in Hampshire. While there was some evidence for late Iron Age and Roman activity at the site, the most significant discovery was a Saxon and medieval cemetery containing the graves of 124 people. The disarticulated bones of around 35 other individuals indicated that the cemetery was used for some time and that there had been disturbance to some of the graves, suggesting that they had not been carefully marked. 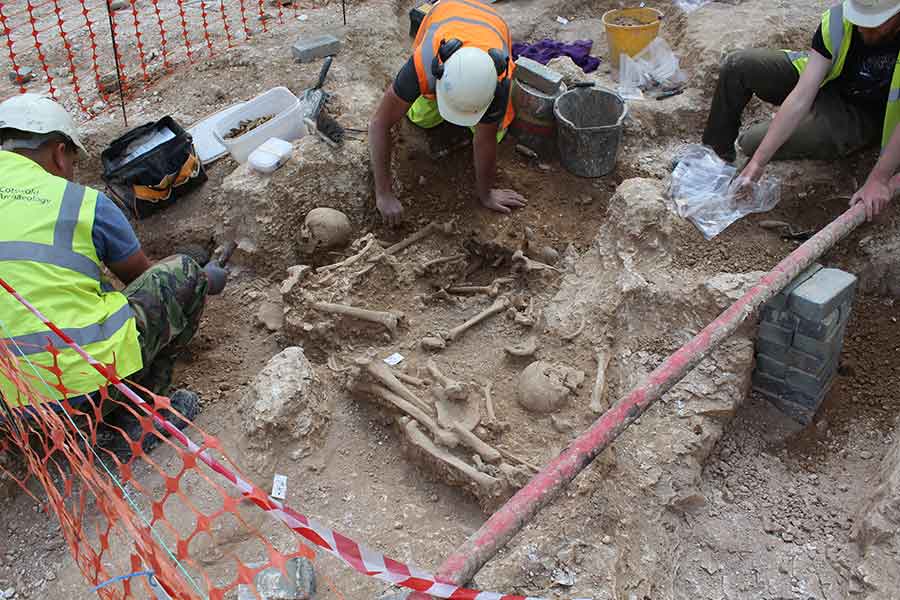 The skeletal remains were carefully analysed by CA osteoarchaeologist, Sharon Clough, and the group was found to be very unusual indeed. Where sex could be determined, almost all of the individuals were adult males (only three confirmed females were present), and young adults aged between around 18 to 25 years were most common; no young children were identified. This is not what would be expected of a ‘typical’ cemetery, representative of a normal population. It is, however, consistent with the profile of an execution cemetery. Such an interpretation is supported by the location of the site close to the modern parish boundary, which may represent an earlier Saxon land boundary. 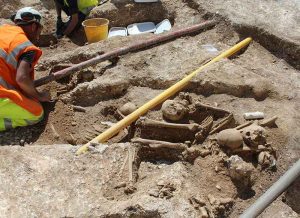 Further evidence for the nature of the site came from the injuries sustained by some of the individuals, which strongly suggested that they had been executed; several had neck vertebrae with cut marks, or had the skull placed separately within the grave; three of the graves contained double burials, indicating that they’d been buried together; one man had had his hands cut off at the wrist and placed underneath his body; two individuals had fractured second cervical vertebrae, suggesting death by hanging. These characteristics are consistent with other sites interpreted as Late Saxon judicial punishment cemeteries.

Of particular interest, the initial results from a programme of radiocarbon dating suggest that the cemetery was in use for an unusually long period of time, from the mid-Saxon period through to the medieval period. The longevity of the burial ground is further indicated by a number of intercutting graves and disturbed bones. Most of the individuals were buried between the 8th and 12th centuries AD, although one of the double burials appears to have been as late as the 13th or 14th century. The site therefore has the potential to make a significant contribution towards our understanding of the administration of justice during the Saxon and medieval periods.

Very few artefacts were recovered from the cemetery, with finds from graves restricted to a small number of animal bones, worked bone artefacts and objects of iron, mainly buckles. A single silver coin of Aethelred II (Aelthelred the Unready), dating from AD 979-985, was found in the left hand of one skeleton. This person had been buried lying face down.

The nature of this site is immensely sombre and we will never know the personal stories of the individuals who met their unfortunate fates somewhere nearby, and were ultimately buried here. Were some of these people victims of sad miscarriages of justice? Perhaps some were executed for what might be considered today to be trivial misdemeanours. Ongoing analysis will hopefully refine our understanding of the dating of the cemetery and the osteobiographies of the individuals, allowing more of their stories to be told.

We are grateful to Aldi Stores Ltd, who funded the archaeological work at the site and the subsequent analysis and reporting, and to David Hopkins (County Archaeologist) and Hampshire Historic Environment Team, who provided advice and monitored the excavation. 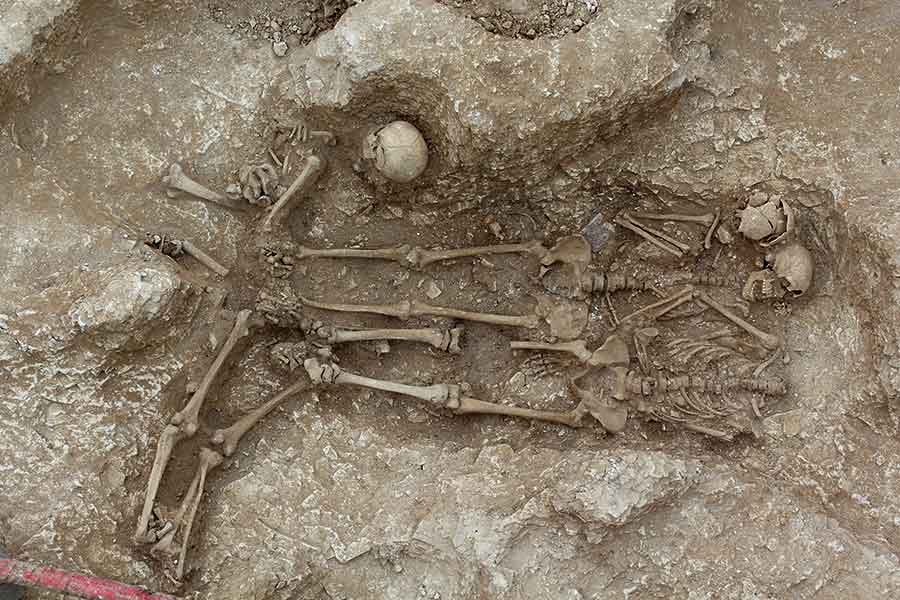