Following four years of hard work across all our teams, CA has just published a monograph on the medieval punishment cemetery discovered in Hampshire. 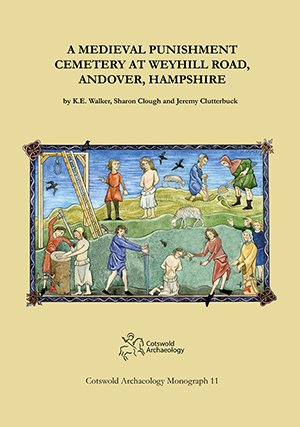 In 2016, a watching brief in advance of construction at a site between Andover and Weyhill revealed disturbed human remains. This formerly isolated roadside location, which had been partly developed in the later 20th century, lies close to the historical boundary between Andover and Abbotts Ann Hundred. The discovery led to the excavation of a densely crowded group of partly disturbed and heavily intercut graves, and it soon became clear that this was not a normal community cemetery. The remains of some 124 individuals, mostly male and adult, were revealed, with much additional disarticulated bone. Many had clearly been buried with their hands tied behind their backs or had been interred face-down, and some had been decapitated.

As might be expected with a rural ‘execution’ (or punishment) cemetery of this type, very few artefacts were recovered. In this case only one find, a silver penny dateable to AD 979-985, allowed close dating, which suggested that the site was a distinctive type of Saxon cemetery known elsewhere in Hampshire. However, radiocarbon dates from articulated burials, selected for their spatial and stratigraphic positions, demonstrate that the cemetery was in use from at least the 10th century (and possibly as early as the 8th century), and continued in use beyond the Norman Conquest to at least the 13th and possibly the 14th century. Stable isotope analysis shows that the people buried here were mostly of local origin.

The significance of the site lies in this evidence for continuity, at a local level, of the organisation of judicial power from Saxon times well into the Middle Ages. It is the first site to provide clear evidence for such duration of a ‘punishment’ cemetery.

The book can be purchased from Oxbow for £19.95

Appendix 2 – After the Cemetery