This Friday, 1st July, we’ll break ground at our exciting new outreach project – looking to identify whether a large earthwork at Brandiers Farm near Minety, Wiltshire, is a missing Roman-era kiln and a key production centre of ceramic building materials (CBM).

The results of a recent geophysical survey (below) of a pronounced earthwork at Brandiers Farm, along with Roman tile and fired clay found liberally on the soil surface, make it highly likely that we’re going to uncover something quite significant. Renowned Roman CBM specialist Peter Warry has discerned that the potential of the site is two-fold: it could be a production centre for ‘TPF’ tiles and, if it is, it could well be linked to the large Roman tile kilns known at Minety, approximately 2km to the west of Brandiers.

TPF tiles are thought to have been produced c. AD100-150 and examples have been found at the known Minety kilns. Additionally, fabric analysis of TPF tiles found in situ on various archaeological sites matches those with the clay around Minety, so traditionally it is thought that TPF tiles were made in this area. However, the problem is that the pottery at the Minety kilns dates the production of pottery to the mid-1st century or earlier, so if tiles and CBM were being produced at the same time, this would actually be too early for TPF type tiles.

Brandiers Farm may turn out to be where the TPF tiles were being made, making Brandiers a civic/municipal kiln linked to Cirencester (Roman Corinium). We know that in the early to mid-2nd century, Minety has more of a supporting and logistical role, so tiles made at Brandiers – some stamped TPF – may have been transported to Minety before being shipped off; this could be an explanation for how this later material ended up at the known Minety kilns. If this turns out to be the case, we could have a very important tile kiln on our hands – originally supplying the major Roman settlements of Cirencester, Gloucester, and Bath, with their much-needed building materials.

The trowels get into action on Monday, and we’ll keep you updated across our social media channels as the dig progresses!

You can read more about Brandiers Farm excavations below: 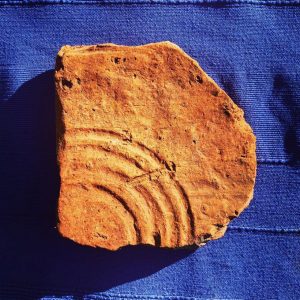 Brandiers Farm: what lies beneath? 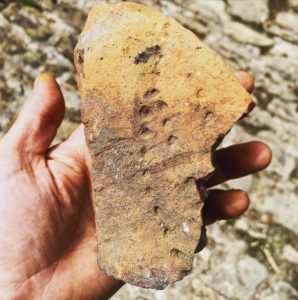 Brandiers Farm: in search of a Roman tile kiln