In November 2011 Cotswold Archaeology excavated part of the western cemetery of Roman Cirencester in advance of development on the old Bridges Motors garage site in Tetbury Road. The excavations were generously funded by St. James’s Place Wealth Management, the town’s largest employer. Much to everyone’s surprise 70 Roman burials were found, including one quite extraordinary one. This was the grave of a 2 to 3 year-old child of unknown sex. The child was buried wearing hobnailed shoes and was accompanied by a pottery feeding vessel and a remarkable enamelled bronze figurine of a cockerel. The cockerel stands 125mm high and the breast, wings, eyes and ‘comb’ are inlaid with enamel, which now appears blue and green. There is a separately moulded tail plate, also enamelled, with ‘openwork’ decoration. The beak is shown open, in the act of crowing. 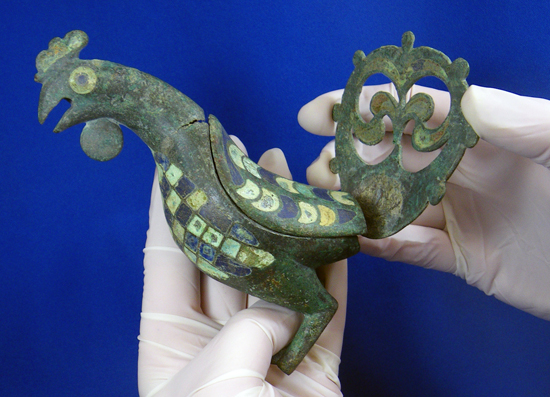 At the time of discovery we knew this was a rare and important find, and accordingly it was sent off for specialist conservation work. This is now complete and it has just been returned to Cirencester. Our Senior Finds Officer Ed McSloy has also been able to find out some more about the figurine. We can now see that the body of the cockerel is hollow; the wing plate and tail made separately and soldered in place. The ‘composite’ construction saved on metal and was more suited to the enamelling process. 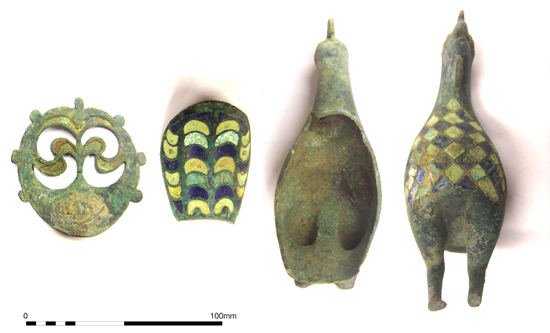 Only eight similar cockerel figurines are known from the Roman world, including four from Britain. The similarities in construction and decoration suggest that they were made at roughly the same time and could have come from the same workshop. Our example is the only one from Britain to have come from a grave and the only one from any location to have survived with a tail. The two which are closest in form are from Cologne in Germany and Buchten in the Netherlands. In these examples the enamelling survives in the original colours of yellow, blue and red and it is probable that the Cirencester example was originally just as brightly coloured. Britain produced some of the finest enamelled objects in the Roman Empire and these were traded as far afield as Germany, France, Spain and Italy. The four enamelled cockerels from the continent all come from Germany and the Low Countries. The Cirencester cockerel probably dates to around the middle of the 2nd century AD.

The cockerel had special significance to the Romans and there is a known connection to the god Mercury. Statues of this god, including one in the Corinium Museum, commonly show a cockerel at the base. The association probably stems from Mercury’s role as the messenger to the gods and that of the cockerel as ‘announcer’ of the new dawn. Mercury was also the ‘herdsman for the dead’, guiding newly deceased souls on their passage to the afterlife. It is therefore possible that the cockerel was an offering by a devotee of Mercury and expresses a parent’s particular concern to ensure safe transit of a loved one into the after world.