The nominations for the 2020 Current Archaeology Awards have just been announced, and we are proud to say that this year CA has been nominated for not one, not two, but THREE awards, each in separate categories! Voting is now live, so please vote for CA at the Current Archaeology website. You can vote for all three if you wish… 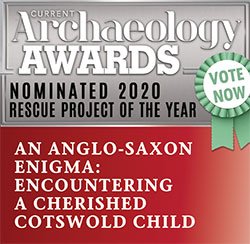 In the Rescue Project of the Year category, we have been nominated for Exercise Shallow Grave. This excavation was undertaken as part of the Ministry of Defence initiative, Operation Nightingale, and was a collaboration between Cotswold Archaeology, Breaking Ground Heritage, the Portable Antiquities Scheme and Gloucestershire County Council.

Operation Nightingale was developed to use archaeology to aid in the recovery of injured and sick military service personnel and veterans. In May 2019, the Shallow Grave team excavated the site of a recently discovered Anglo-Saxon inhumation burial, which was highly fragile and located close to the surface, and was thus at risk of further damage or illicit disturbance. The excavation resulted in the discovery of a remarkable small group of Anglo-Saxon inhumation burials, including the grave of a child buried with an astonishing assemblage of grave-goods. You can read more about the discoveries in our previous story about the excavation. 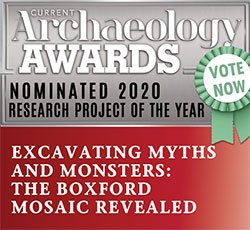 Our continuing work at Boxford, in Berkshire, has been nominated in the Best Research Project of the Year category. The project is a collaboration with the Boxford History Project and Berkshire Archaeology Research Group, funded by the Heritage Lottery Fund. In summer 2019 we returned to the site of the now famous Boxford mosaic, initially uncovered in 2017, which depicts scenes from Greek Mythology including Bellerophon slaying the chimera. This year’s excavation allowed the full mosaic floor to be uncovered and recorded, and the results have been truly astounding. Further elements of the imagery on the mosaic have been revealed, showing a greater array of tales from Greek Mythology, and we also now have a better understanding of the development of the villa building in which the mosaic was placed.

Life and Death in the Countryside of Roman Britain 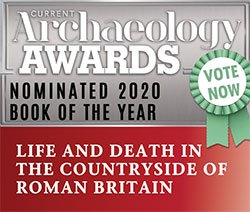 Last but not least, we are thrilled to have been nominated for our collaborative book, ‘Life and Death in the Countryside of Roman Britain’. This volume is the third and final volume in the ‘New Visions of the Countryside of Roman Britain’ series; it deals with the rural people of Roman Britain…how they looked, lived, worshiped, died, and how they were treated in death. Cotswold Archaeology was a major partner in this hugely successful Leverhulme Trust funded project, along with the University of Reading, the Archaeology Data Service and Historic England. CA’s Neil Holbrook acted as a series editor for the volumes, and the volume was co-authored by our very own Tom Brindle (Post-Excavation Manager). More information about the project is available on the ADS website, where you can download free PDFs of volume 1 and volume 2 in the series, and access the online database.

Voting closes on 10th February 2020, and the winners will be announced at the Current Archaeology Live! 2020 conference, to be held at the University of London’s Senate House on 28-29 February – more information on the conference can be found at www.archaeology.co.uk/live

We’d be grateful for your votes!