A volume on ‘The Archaeology of the Broadmead Expansion Project at Cabot Circus, Bristol from 2005 – 2008’ has been released in hardback.

The development of Cabot Circus shopping centre presented a rare opportunity for archaeological investigation of a large part of the Broadmead suburb of Bristol. Late in 2005 Cotswold Archaeology and Pre-Construct Archaeology (a consortium of archaeological practices collectively known as CAPCA) commenced a programme of archaeological work and this new volume brings together the project’s exciting discoveries, covering everything from evidence for the prehistoric landscape to elements of a Dominican friary and later Friends’ Meeting House (structural remains of which survive as scheduled buildings preserved within a large open piazza in the west of the new development). The area was also an important asset for the industrial suburb of medieval Bristol and proved to be home to tanning, leatherworking, ironworking and cloth industries. 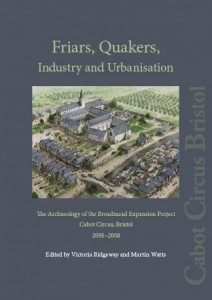