CA was pleased to welcome two of Britain’s leading experts yesterday to inspect the newly discovered tombstone of Bodicacia. Dr Martin Henig and Dr Roger Tomlin, both of Oxford University, spent a couple of hours examining the discovery.

Martin commented that the upper part of the tombstone, the pediment, is a superb example of  Cotswold-school sculpture. The pediment is embellished with cresting, and surmounted by a finial, a very rare feature. It is inhabited by a mask of Oceanus which in this context is again virtually unique. Pedimented tombs such as this were doubtless intended to represent much grander temple tombs or mausolea where the dead might reside. The stone was perhaps originally set in the wall of a funerary enclosure where annual or seasonal feasting took place. 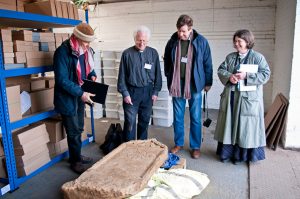 Interestingly the face of Oceanus has been deliberately chiselled off in Roman times.  Is this a case of Christian iconoclasm? Perhaps a pagan depiction at least partially in the round was a ‘graven image’ of a ‘demon’ which might be worshipped or in some way harmed those buried in the late Roman grave.

Whilst the name Bodicacia is previously unrecorded, Roger thought that this is a plausible Celtic name. So the simplest reading of the inscription is ‘To the Shades of the Dead. Bodicacia (my) wife lived 27 years.‘

The tombstone probably dates to the 2nd century AD. Perhaps it was originally placed inside the nearby walled cemetery found on the former Bridges Garage site by CA in 2011?